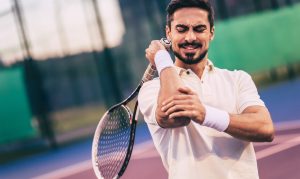 My physiotherapist told me I have tennis elbow but I don’t play tennis?!

Unfortunately,  you don’t need to be the next Andy Murray to be given a diagnosis of ‘tennis elbow’ (or ‘lateral epicondylitis’, to give it it’s Sunday name).  This commonly presents as pain on the outside of the elbow, which can radiate down the forearm to the wrist and leads to weakness in the forearm muscles.

What is tennis elbow?

Although the name suggests that it is an inflammatory condition (usually words that end in –itis relate to inflammatory issues), this is usually only a factor at the very beginning of the condition.  It’s been shown that the elbow pain is more likely to result from microscopic tearing of the tendons that attach to the outside of the elbow.  This, combined with incomplete repair of the muscle fibres and poor blood supply create a perfect storm for causing pain. 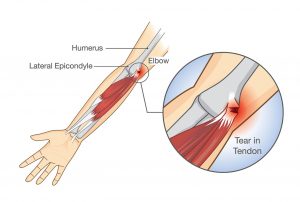 You may notice pain:

You may also find it difficult to fully extend your arm.

So how did I get it then?

Tennis elbow is a common musculoskeletal condition. It’s estimated that as many as one in three people have tennis elbow at any given time. Each year in the UK, about five in every 1,000 people go to see their physiotherapist about tennis elbow.  The condition usually affects adults and is more common in people who are 40-60 years of age. Men and women are equally affected.

It has been suggested that only 5% of diagnoses of tennis elbow result from playing tennis.  One systematic review suggested the top three causes were from repetitive use of tools weighing more than 1kg, lifting more than 20kg more than 10 times per day and repetitive movements for longer than two hours per day.  Repetitive movements can often involve office and work-related activities such as typing, using a computer mouse and using a mobile phone.

What can I do about it?

Tennis elbow is a self-limiting condition, which means it will eventually get better without treatment. However, there are treatments that can be used to improve your symptoms and speed up your recovery. It’s important that you rest your injured arm and stop doing the activity that’s causing the problem. If you perform a lot of repetitive activities, take regular breaks!  Using a small elbow support, can be helpful.  Try some of these stretches and exercises below to see if you can get some relief and increase the strength of the muscles.  However, if you have been experiencing consistent symptoms for longer than two weeks and you have any doubts about your condition, the best advice would be to book in for an assessment with one of our physiotherapists! 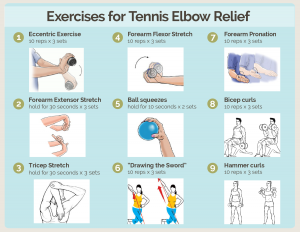